“Consider it pure joy, my brothers, whenever you face trials of many kinds, because you know that the testing of your faith develops perseverance.” James 1:2-3

It was February 1998 and I was feeling anything but joyful. Ten months before, my beloved husband, Ray, had died of a massive heart attack a few weeks after his 39th birthday. Even though I was a rational person and knew all-too-well the details of what happened, on some level I maintained a protective mantle of denial. I couldn’t accept or fathom how he could go to work one sunny spring Saturday and never return home to me and our two young daughters. But bit by bit the reality dripped into my soul, creating an underlying sadness that colored many of my days.

In preparing for Ray’s funeral, I wrote a letter to him which one of our pastors read during the service. Amongst other comments I stated he’d not only left a lasting legacy in the lives of our daughters, but also in the beauty of our garden. You see, Ray had a horticulture degree and he planted many interesting things in our yard. He would tell me about the special plants he selected and teach me their names. Although he didn’t eschew better-known plants like pansies and daffodils, he was interested in having unique items as well. When several of his horticulture colleagues paid a visit and walked the garden with me after Ray died, oohing and ahhing over a number of specimens, I took note all over again how special that part of his legacy was. I also recognized how important it was for me to try to learn how to take care of it, otherwise it would only be a matter of time before it was gone.

And so that February day found me outside preparing to remove the blanket of leaves that still enshrouded the planting beds, with an aching in my heart as I longed for Ray and wished he was there to remove those leaves. As I started clearing the beds, I noticed a number of the perennials Ray planted were beginning to emerge from the soil. Seeing those plants and knowing they had persevered through the cold, dark winter gave me a glimmer of hope. If they could make it through that stark season, maybe I could survive my season of darkness.

Little did I know, gardening would become my passion and would provide many moments of hope and healing as well as a very real connection to Ray. Not only has God faithfully provided for me and my family since Ray’s death, He has ministered to me over and over again through the beauty of his creation. While “playing in the dirt”, I’ve been reminded of his promises, seen tangible examples of Scriptural principles and found solace for my soul.

This blog is born of a desire to share some of what I’ve learned spiritually and horticulturally. I hope you’ll come back to the garden with me. 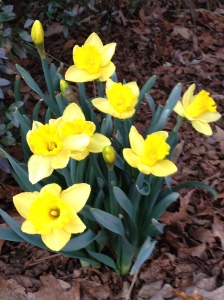 One of several varieties of daffodils Ray planted and the earliest to bloom. They come back year after year, a cheerful reminder of him!