Red roses have been associated with romantic love for centuries. According to the ProFlowers website, “The red rose began its illustrious symbolic history in Greek and Roman iconography, where it was tied to Aphrodite, or Venus, the goddess of love.” In his enduring poem, “A Red, Red Rose”, Robert Burns likened his true love to one of the exquisite flowers. I, too, have been touched by the beauty of red roses. As a matter of fact, it’s probably not an overstatement to say one played a role in changing the course of my life . . .

When I was in my early twenties, I met a handsome young man and promptly fell head-over-heels for him. Surely he was “the one”! Some months later, it became evident he wasn’t, as he stated his desire to return to his college sweetheart, who he’d never completely gotten over. I was crushed. Yet, a mere week later, I met Ray, another handsome young man who I’d come to know and love. He was thoughtful and kind and had a bit of a stubborn streak. His tenacity came in handy since it took no small effort on his part to break through the fog of despondency that settled around me after “not-the-one-after-all” broke up with me. As summer turned into fall, I continued to turn down Ray’s invitations, seeing him instead at activities sponsored by the singles group where we first met. I commented to my mom, “I’m not sure why he keeps asking me out.” Her reply, “He’s obviously found someone he likes and isn’t going to give up easily!”

The Singles Group Christmas dinner was held on my birthday that year. After the banquet, Ray presented me with a single red rose. Somehow that rose broke through my defenses and opened my heart to the possibility of loving again. And, as the saying goes, the rest is history. 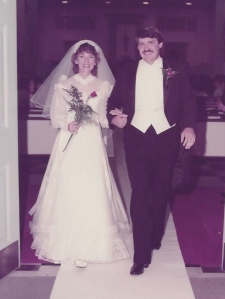 When Ray and I got married, I carried a red rose with a sprig of baby’s breath and some greenery, despite the florist’s protestations that the bridesmaids’ bouquets would cost more than mine. Over the years we were married, Ray frequently gave me a single red rose for my birthday, our anniversary and other special occasions, hearkening back to the first one and what it meant to us.

The last birthday Ray spent with me was no different. When I came home from work that night it seemed like the kitchen was full of roses – miniature pink ones for our daughters, a dozen yellow ones and a single red one for me. In addition to the real red rose, Ray gave me a beautiful pin.

I still marvel at this gift in light of the fact he died four months to the day later. Ray didn’t know he wouldn’t be around to give me single red roses on birthdays yet to come, but God did and I believe he somehow encouraged Ray to give me the pin which I wear one day each year – now 18 birthdays and counting.

When Ray died, I took a single red rose to the funeral home and asked the funeral director to place it in his hands for me. It was a fitting close to our tradition. Sometimes I think about what it will be like when I finally get to see Ray again. Might he have that rose in his hands, ready to give it back to me? After all, nothing’s impossible for God. Yet rose or no rose, I’m certain the longed for reunion will take place. I will see Ray again and we’ll spend eternity together worshipping and praising our great Redeemer. I can be sure because the baby whose birth we just celebrated was the Word made flesh, who dwelt among us, lived a sinless life and died on a rugged cross that we might live with him FOREVER.

One thought on “A single red rose”