Two years ago I planted a passionflower vine by my mailbox. I’d seen one growing profusely at the garden where I volunteer.

Not only are the flowers intricately beautiful, but Passiflora is the only host genus for the Gulf Fritillary butterfly’s caterpillars. (See “Very Hungry Caterpillars”, September 2014 for more info.)

That first season I only got to enjoy two or three flowers before the ravenous caterpillars started devouring the plant. Last year the passionflower was well-established and provided numerous blossoms for me to gaze upon as well as nourishment for several waves of my little orange buddies with black spikes.

Now in its third season, the passionflower is flourishing. Ok, so that’s putting it politely. It’s actually starting to take over the entire mailbox bed, including the summer annuals residing there. For several weeks I thought, “No problem! Soon the caterpillars will show up. They’ll have plenty to eat plus I’ll have plenty of flowers.” I examined the vine every morning when I went out to collect the newspaper and every evening when I checked for mail. No caterpillars. Then one day I saw a tiny caterpillar in the clutches of a wasp. What did I do? I turned to Google, of course! “Do wasps eat caterpillars?” Unfortunately, they do.

I kept up my twice-daily vigil, hoping there would eventually be enough caterpillars to satisfy the wasps and still leave some to make it all the way through their life cycle. Days passed with only an occasional sighting. Then I realized there was an army of ants busily traversing the sprawling vines. Back to Google. “Do ants eat caterpillars?” Yes, yes they do. By this time I was feeling rather dismal about the situation since I doubted it would be possible to get rid of the ants without negatively impacting the caterpillars.

My five-year-old grandson, Joshua, encouraged me to find the ant mound and deal with the pesky marauders at their source. I was somewhat surprised he didn’t say, “That’s the way the world works, Grammie”, as he often does when I bemoan the fact some predator has taken down its prey. Being an avid fan of “Wild Kratts”, Joshua is incredibly knowledgeable about a multitude of creatures. He takes the food chain in stride, knowing some animals get eaten by other animals as God provides for all of his creation.

Yet I can’t help but wonder if the way the world’s working isn’t the way it’s supposed to work at all, particularly when it comes to death. Some months ago I was reading the first chapter of Genesis, a passage I’ve read MANY times, when I noticed something. Take a look at verses 29 and 30: Then God said, “I give you every seed-bearing plant on the face of the whole earth and every tree that has fruit with seed in it. They will be yours for food.  And to all the beasts of the earth and all the birds in the sky and all the creatures that move along the ground—everything that has the breath of life in it—I give every green plant for food.” (Emphasis mine.) Do you see it too? In the beginning, when God created everything and it was all good, there was no death, not even animals eating each other. Only after the fall did the shedding of blood become commonplace and, at times, necessary. Sadly, that’s the way the world works now, even when it’s man spilling a fellow man’s blood.

But there was One who came to save and restore by shedding his own precious blood. Because He did, we have the assurance that someday all things will be set right again. The world will once more work as its Creator originally intended. Speaking of Jesus’ return, the prophet Isaiah said, 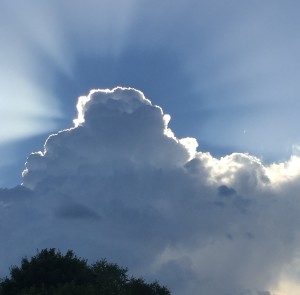 “Righteousness will be his belt and faithfulness the sash around his waist. The wolf will live with the lamb,  the leopard will lie down with the goat, the calf and the lion and the yearling together; and a little child will lead them. The cow will feed with the bear,  their young will lie down together,  and the lion will eat straw like the ox. The infant will play near the cobra’s den,  and the young child will put its hand into the viper’s nest. They will neither harm nor destroy on all my holy mountain, for the earth will be filled with the knowledge of the Lord as the waters cover the sea.” [1] (Emphasis mine.)

His promised return is certain. We can wait confidently and expectantly for the day when there will be no more pain or tears, when death will be swallowed up in victory once and for all. And while we wait, God graciously sustains his creation . . .

Several days ago my morning caterpillar search yielded the results I’d been hoping for. A grateful smile spread across my face as I discovered a dozen or so voracious nibblers of various sizes. They’ve been steadily eating and growing ever since and have been joined by more. A small thing in the overall scheme of life to be sure, but a gift nonetheless from the One who knows how much I delight in hosting the Gulf fritillaries and their offspring each year. 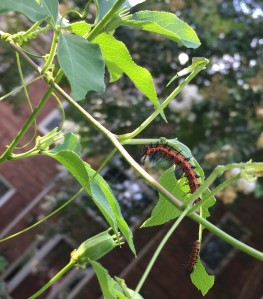