The morning of June 29, 1992 found me seated in a conference room at a law office. Ray, next to me at the large, polished-to-a-shine table, remained his usual calm self. But the cumulative stress leading up to that moment overflowed as tears streamed from my eyes. No, we weren’t on the brink of divorce . . . it was time to settle on our house in Georgia.

Ray and I spent our first few months of marriage in a two-bedroom apartment, long enough to know we’d prefer to put the rent money toward a mortgage instead. The image of Ray sitting at his drawing board/desk, pencil in hand calculating and re-calculating budget scenarios makes me smile as I recall his diligence. After one such number-crunching session, he announced, “It will be tight, but I think we can do it.” Our options were limited by our rather meager finances, but we purchased a brand new townhouse, attached to one other unit which housed another young couple.

It was a perfect first home, plenty-roomy inside with a small yard for Ray to display his landscaping skills. When daughter Mary came along a couple of years later, the open floorplan allowed her to explore under our watchful eyes. However, when I became pregnant with our second daughter, Jessie, we decided to look for a larger, single-family home where we could put down roots and raise our family. What a nightmare! Houses in our preferred area were out of our price range, while those within our financial boundaries were far-removed from our desired location. Add the heat and humidity of a Delaware summer and the hormonal fluctuations of pregnancy – not a pretty picture.

Then one Sunday afternoon, Ray went to the showing of a 20-year-old house a few blocks from our townhouse. Hot, tired and generally miserable, I stayed home. Upon his return, Ray declared, “You need to see it! I think this could be the one.” And so it was. We moved into our “raise- the-kids” house the day before Thanksgiving 1989. 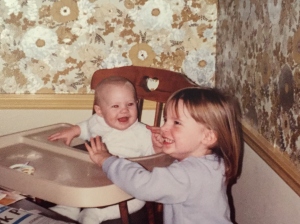 When you buy an older home, you expect to replace some things, both decorative and functional. Our first order of business: removing the shiny, 1960’s-era wallpaper in the kitchen – the glare was distracting! Eventually, we progressed to more substantial changes. We replaced the roof and added vinyl siding and double-paned, tilt-in-to-clean windows. These latter upgrades came only after several discussions with my management regarding a potential transfer to Georgia. The possibility of such a move had been bandied about by our business leaders off and on for months since it would put us closer to our carpet-industry customers. Assured we would be staying in Delaware, we proceeded with the renovations . . .

A little over a year after the last window was hung, the last shingle hammered into place, there we were in that law-office conference room to make settlement on our second-attempt, raise-the-kids house a thousand miles away from the first one. Yes, God does have a sense of humor, or, as one old saying puts it: “If you want to make God laugh, tell him your plans.” Scripture makes it clear his plans are the ones that prevail.[1]

Before the legal proceedings and endless paper-signing began, someone ventured to inquire about my emotional state: “Are you ok?” I wailed in reply, “My belongings are on a moving van somewhere between here and Delaware; my daughters are in Charlotte with my parents; my brand new carpet has Georgia-clay footprints all over it. No! I’m not alright!!” I felt uprooted, the pieces of my life scattered.

But I wasn’t. And they weren’t. My roots were deeply and firmly planted in the One who held each piece and every detail in his firm grasp.[2]

So much has transpired over the past quarter-century. My Georgia home was indeed our raise-the-kids house, but I did much of the raising on my own after Ray’s death not quite five years after the move. Sometimes I wonder what our lives would have been like had we stayed in Delaware, even if Ray might still be alive. Yet I know all his days were written in God’s book before even one came to be.[3] And I think of relationships and experiences woven into my life because God’s good plan[4] brought us to Georgia – friendships formed, lives touched, losses endured – as He’s worked all things together for good.[5]

Even after all the years of living in the South, my accent is indiscernible, prompting people to ask where I’m from. My well-practiced reply?: “I was born in North Carolina, grew up in Delaware and moved to Georgia in ’92, but I consider North Carolina to be home since several generations of my family have lived there.” Yes, that’s an accurate recounting of where I’ve put down roots during my earthly sojourn. But I know my forever-Home awaits, where Jesus is preparing a place for me.[6]

Until then, I will remain securely rooted in the One who sustains me,[7] for in Him all God’s promises are “Yes” and “Amen”.[8]

2 thoughts on “Putting down roots”