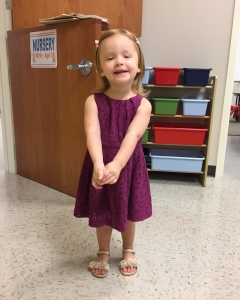 One recent Grammie day[1] found me, 7-year-old Joshua, and almost-three-year-old Emma having a pleasant chat about some kid-friendly subject. Somehow the topic turned to an episode of disobedience on Emma’s part. I watched as my sweet, spunky sprite withered under the weight of her brother’s words. She rounded her shoulders and gazed intently at the floor while Joshua relished telling every detail about the infraction and the ensuing Mom-administered discipline.

Joshua’s words trailed off and Emma cast a cautious glance my way, no doubt wondering if I would compound her embarrassment by adding to Joshua’s diatribe. I calmly confirmed her behavior was objectionable and not to be repeated, but quickly turned my attention to her accuser. Most Grammie days provide at least one opportunity to quote the Golden Rule. (Matthew 7:12) This was such a time.

“Joshua, how would you like it if Emma told me all about your misbehavior and how Mommy disciplined you? Do unto others!”

I followed up with my best effort at an age-appropriate explanation of Jesus’ teaching regarding putting a higher priority on making sure our own behavior honors Him before we start pointing out others’ flaws. As recorded in Matthew 7, Jesus said:

Ever since Adam and Eve ate the forbidden fruit, we’ve been hiding and blame-shifting. (Genesis 3:1-13) Burdened with shame, we attempt to take the spotlight off of our own failings by magnifying the short-comings of others. But the One who knows our every thought and action (Psalm 139:1-12) isn’t impressed by our diversionary tactics or our self-righteous attitudes, as recounted in the parable of the Pharisee and the tax collector:

(Jesus) also told this parable to some who trusted in themselves that they were righteous, and treated others with contempt: “Two men went up into the temple to pray, one a Pharisee and the other a tax collector. The Pharisee, standing by himself, prayed thus: ‘God, I thank you that I am not like other men, extortioners, unjust, adulterers, or even like this tax collector. I fast twice a week; I give tithes of all that I get.’ But the tax collector, standing far off, would not even lift up his eyes to heaven, but beat his breast, saying, ‘God, be merciful to me, a sinner!’ I tell you, this man went down to his house justified, rather than the other. For everyone who exalts himself will be humbled, but the one who humbles himself will be exalted.” (Luke 18:9-14)

Likewise, Jesus refused to allow the woman caught in adultery to be used as a pawn by the sanctimonious religious leaders who were trying to trip Him up, yet again, by presenting Him with what they hoped would be a no-win situation. Instead, Jesus reminded them of their own sinfulness:

Early in the morning he came again to the temple. All the people came to him, and he sat down and taught them. The scribes and the Pharisees brought a woman who had been caught in adultery, and placing her in the midst they said to him, “Teacher, this woman has been caught in the act of adultery. Now in the Law, Moses commanded us to stone such women. So what do you say?” This they said to test him, that they might have some charge to bring against him. Jesus bent down and wrote with his finger on the ground. And as they continued to ask him, he stood up and said to them, “Let him who is without sin among you be the first to throw a stone at her.” And once more he bent down and wrote on the ground. But when they heard it, they went away one by one, beginning with the older ones, and Jesus was left alone with the woman standing before him. Jesus stood up and said to her, “Woman, where are they? Has no one condemned you?” She said, “No one, Lord.” And Jesus said, “Neither do I condemn you; go, and from now on sin no more.” (John 8:2-11)

Forgiveness instead of condemnation. Isn’t that what we all long for? Praise God, we have a Savior who took our sins upon Himself and bore the penalty we deserved. (Isaiah 53:4-6) Furthermore, when we confess our sins, He is faithful and just to forgive us and to cleanse us from all unrighteousness. (1 John 1:9)

We’ll continue to struggle with sin until we’re called Home, as so eloquently described by the Apostle Paul in his letter to the Romans. (Romans 7:15-19) Indeed, each one of us has plenty of logs to deal with. Nonetheless, there are times when we must address the sins of others. Speaking truth in love, we are to restore them gently, being watchful lest we too be tempted (Ephesians 4:15; Galatians 6:1), always remembering how much God has forgiven us.

Somewhere in the course of all the reading I do, I came across this sentiment: “Be the kind of woman who can help a sister in Christ straighten her crown without telling anyone else it was crooked.”

Do unto others. Restore gently. Forgive much.

O Lord, if You kept a record of our iniquities, who could stand? (Psalm 130:3) Like sweet Emma and the careless words of her brother, we would wither under the weight of your wrath. But with You there is forgiveness. You are our compassionate Father, merciful and gracious, slow to anger, and abounding in steadfast love and faithfulness. (Exodus 34:6) You know our frames and remember we are but dust. (Psalm 103:13-14) Please help us to do likewise, granting others the same grace we’ve received from You.

[1] My grandchildren and I refer to my bi-weekly, day-long stays while daughter Mary is at work as “Grammie days”.