Even though it still appears plenty sturdy, my 27-year-old house is showing signs of wear and tear – peeling paint, random cracks from settling, occasional major repairs – reminders of inevitable decline in spite of well-intentioned upkeep.

So, the other day when a large puddle appeared where my master bath toilet is bolted to the floor, I sighed, called my always-dependable plumber and tried not to worry too much about the time and money required to fix the problem. Nonetheless, a nagging little voice heckled from the recesses of my mind, “This could be a big, costly deal.”

The next day dawned, bright and beautiful, as my garden beckoned me to come outside, which is exactly where I headed as soon as the plumber left. The repair took part of my tax refund that I would rather have spent on landscaping, but several hours of adjusting, tightening and probing various elements of my plumbing system appeared to solve the problem.

Or so I thought.

After an hour of playing in the dirt, I came inside for a drink and heard, “Tap. Tap, tap. Tap. Tap, tap, tap.” My first inclination was to check the deck to see if one of my feathered friends was pecking on the house, but a quick glance revealed only the usual array of contented visitors around the birdfeeders. Further investigation exposed the source of the mystery sound: water drops splatting on the floor beneath the ceiling fan as several ever-widening damp spots formed under the master bath drain pipe.

I left a distress-laden message for my plumber and trudged back outside. The repair-associated relief I felt earlier had fled, taking with it the joy normally associated with being in my garden. The rest of the afternoon found me making frequent reconnaissance treks to check on the incessant dripping. I silently pleaded with it to stop, hoping I could stare it into submission. Meanwhile, I engaged in a back-and-forth discussion with myself, see-sawing between imagining the worst and reminding myself it was a thing to be repaired, not a person with a terminal illness. 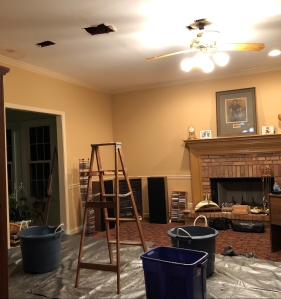 In spite of my valiant efforts, the taunting thoughts multiplied and threatened to overtake the more reasonable ones. I almost convinced myself it was time to move into an over-55 community where upkeep was someone else’s responsibility. But then, two hours into my plumber’s return visit, as I gazed at strategically-placed tarps and tubs and several holes in my ceiling, one of my grandmother’s sayings came to me, “Nothing’s so bad it couldn’t be worse.”

And so it was in this case. Had the leak occurred a few weeks earlier, dozens of pieces from my beloved Dickens Village would have been on display in the now-besieged room. Instead, they were all safely packed away, leaving plenty of space for the accouterments associated with the follow-up repair. That realization dealt the decisive blow to the negative side of my hours-long internal argument and allowed me to utter a sincere, “Thank You, Lord. It really could have been so much worse.” Even so, I regretted my inability to arrive at that place of peace hours earlier, since the cause of my angst was indeed fixable.

I recalled a long-ago conversation with my late husband, Ray. Exasperated by his peaceful demeanor in the midst of my recounting of some tale of woe, I had the audacity to ask, “Does anything short of death upset you?” His calm reply? “Not much.” After his sudden death some months later at age 39, I knew he was right. It’s a lesson I strive to remember, though there are times I behave otherwise.

As long as we’re in this fallen world, we’ll have troubles of varying kinds, from minor annoyances to life-changing trauma. Jesus said as much. But in the next breath, He added the admonition not to fear followed by the assurance He’d overcome the world (John 16:33). Our dear Savior suffered much when He walked this earth. As a man of sorrows, acquainted with grief, He compassionately comprehends the hardships we face (Isaiah 53:3; Hebrews 4:15).

Furthermore, God uses trials, big and small, to transform us, to strengthen our faith and to remind us we’re not in control. We can trust His sovereign plans for us, knowing He will work all things together for good (Romans 8:28-29).

Scripture overflows with God’s promises and the longer we walk with Him, the more examples of His love and faithfulness we have to draw on from our own lives. When faced with challenges, we must encourage ourselves with truth, not ceasing until truth triumphs in our hearts and minds. This quote from Welsh pastor D. Martyn Lloyd Jones is one I’ve turned to repeatedly over the years:

“Have you realized that most of your unhappiness in life is due to the fact that you are listening to yourself instead of talking to yourself? . . . The main art in the matter of spiritual living is to know how to handle yourself. You have to take yourself in hand, you have to address yourself, preach to yourself, question yourself. You must say to your soul: ‘Why art thou cast down’– what business have you to be disquieted? You must turn on yourself, upbraid yourself, condemn yourself, exhort yourself, and say to yourself: ‘Hope thou in God’– instead of muttering in this depressed, unhappy way. And then you must go on to remind yourself of God, Who God is, and what God is and what God has done, and what God has pledged Himself to do.”[1]

My aging house isn’t the only thing that’s showing signs of wear and tear. One look in the mirror reminds me I’m far from 20-something, as does the muscle stiffness that accompanies my daily exodus from the comfort of my bed. All creation groans, waiting to be set free when Jesus returns (Romans 8:18-23). But I know Jesus is preparing a forever Home for me that will never deteriorate (John 14:1-3) and an imperishable body that won’t get sick or die (1 Corinthians 15:50-56).

2 thoughts on “Preach to yourself!”