Who am I to tell my story on a podcast? I haven’t written a book, though I hope to do so. I don’t lead a well-known ministry or have a bunch of followers on any form of social media.

Such were my thoughts when Karen Hodge, Women’s Ministry Coordinator for the PCA[1], first mentioned the possibility. I was grateful for the opportunity to share blog posts on the enCourage website from time to time. But record an episode for the weekly podcast? Thanks, but I preferred to leave that to the more well-known women in our denomination.

A year after that brief conversation, the offer resurfaced. In the intervening months, I had a change of heart.  What brought about the change? I still hadn’t published a book or become a household name in PCA circles. No, but I’d become acquainted with the idea of stewarding our stories, enlightened to the fact that my story isn’t ultimately about me. It’s all about God and His amazing grace extended to those He loves, a story begun before the foundation of the world and lasting into eternity (Ephesians 1:3-14).

This is the time and place God has appointed for me to live out my earthly chapter of that grand narrative (Acts 17:26). I began my blog, Back 2 the Garden, to glorify Him and encourage others by proclaiming His faithfulness, compassion, and lovingkindness. Now I was being given an opportunity to put an audible voice to those words.

It was still with some trepidation, but I agreed to proceed and submitted an outline of my story. Karen responded with a list of appropriate questions. I prepared and prayed. Yet when the day arrived to record the podcast I kept checking the clock, as the knot in my stomach tightened and those same old “who am I?” misgivings cluttered my thoughts.

Once we began our conversation, the knot relaxed and I focused on my message. Half an hour later we were done. Phew! Mission accomplished.

But alas, there appeared to be some technical issues. Hopefully, the glitches could be resolved through the magic of editing. Nonetheless, doubt regarding the viability of the recording watered the seed of “not good enough”, which germinated into a prayer of, “If it isn’t good enough, Lord, please help the recording not to be fixable.”

Weeks passed before I got to listen to the tape. My part was barely audible, but what I said made sense and included most of what I hoped to convey. My relief was short-lived, supplanted the next day by news the disparity in volume between my part and Karen’s couldn’t be resolved.  However, the message included an invitation to try again.

It took 24 hours for me to accept that invitation, a full day to quell the doubts running rampant. “See! It’s not meant to be. Nobody needs to hear your story.”

On the day appointed to re-record the interview, a technology-adept friend provided special headphones with a built-in microphone to improve the sound quality on my end. Numerous friends were praying. I was ready. And then, one question into the interview, my internet went down. And came back. And went down again. After three attempts to reply to that first question, Karen offered one last time slot the following week, saying mine was the only segment of the new season left to record and she truly wanted to include it. I agreed, buoyed by her sincere desire to give me every possible chance to tell my story.

I hadn’t even had time to unplug my computer when Karen’s assistant, also a longtime friend, texted, “This is a spiritual battle.”

Yep. This brazen interference made it abundantly obvious who didn’t want me to praise God in a broader-than-usual forum. And that realization transformed my timidity into firm resolve. I wouldn’t be silenced by the father of lies (John 8:44).

An hour before the last-chance interview was to begin, my internet went down. Noooo! I packed up my technology – computer, power cord, super headphones – and mostly obeyed the speed limit as I drove to my daughter’s house.  I should have planned to be there all along since my son-in-law proudly told me not two days before that their internet speed had been upgraded to a level comparable to NASA’s. The house was uncharacteristically quiet with the children at school, empty except for June, the family dog. I tucked her into the garage with her water dish and some extra kibble. No need to have her BIG voice providing background music for the interview. I ensconced myself in Mary and Justin’s walk-in closet – the most soundproof place in the house – in case their overly-zealous leaf-blowing neighbor decided to crank up his equipment. 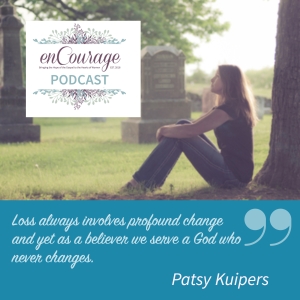 I took several deep breaths to settle my nerves. There in my safe cocoon, surrounded by clothes and innumerable prayers, I proceeded to have a pleasant chat with Karen. Within 24 hours I received the all-clear – the recording was usable. When I listened to it a few days later, I sounded more conversational, less stressed than the first time. Though some of the details varied, the message was the same: God is faithful. We can trust Him, even in our most difficult circumstances when we don’t understand. He’ll never leave us or forsake us. My story to steward, my testimony to bear.

You have a story too, dear reader. Satan attempts to silence us with lies and doubts, but Jesus made it clear we’re not to hide our light under a basket (Matthew 5:14-16). Furthermore, scripture tells us to be ready to give an answer for the hope that lies within us (1 Peter 3:15). Our hope rests on the certain promises of God and provides a sure and steadfast anchor for our souls (Hebrews 6:19).

Just like every blog post I write, I pray the Lord will use the podcast for His glory, to send hope and encouragement to those who hear it.

Here’s the link if you’d like to listen to my conversation with Karen, “Loving Christ in the Midst of Loss”:https://encourage.pcacdm.org/?p=2731