Several weeks ago, I received the following text from a dear sister in Christ, “Praying that the Lord will refresh you by His Word and Spirit today . . . some heavenly hugs to remind you of His presence . . . some quiet moments.”

Prompted by her knowledge that I was dealing with some weighty matters, the text itself felt like one of the hugs she wished for me. Oh the blessing of friends who take note of our concerns and reach out to encourage us!

I texted my thanks and mentioned I hoped to spend time in my garden, the backdrop to some of my sweetest moments with the Lord, later that day. Being outside often feels like a big Fatherly bear hug, one that melts my stress and recalibrates my perspective. But those of you who are longtime readers know I frequently find special treasures when I’m working in my yard. Gifts I imagine the Lord tucking tenderly here and there for me to discover and delight over.

Attired in my yard clothes – faded jeans, PFG shirt, well-worn work boots, and a wide-brimmed hat – I headed outside in search of solace. The reel mower whirred as I pushed it around and around what I refer to as my “keyhole of grass”. (I’m NOT a proponent of giant swaths of perfectly-manicured turf, but I’ll save that soapbox for another post.) The sun warmed my back and the tension in my shoulders subsided. Bees and butterflies visited one bright blossom after another. The fresh air worked its usual magic and nudged my cares aside, at least for a while.

I’d been outside for a couple of hours when I remembered my friend’s message, her prayer for heavenly hugs. Although I’d been reveling in the beauty of the afternoon, grateful to be playing in the dirt, I hadn’t come across anything specific that prompted an exclamation of, “That’s it! That’s today’s treasure, a heavenly hug.”

It’s ok, I thought. The whole afternoon’s been a blessing. 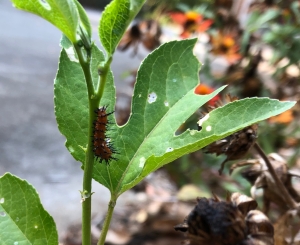 My time outside was drawing to a close when I pulled up a spent summer annual, revealing a spindly bit of passionflower vine with a solitary gulf fritillary caterpillar munching intently on a bedraggled leaf. My heart soared! I’d been hugged.

I suppose most folks wouldn’t have paid much attention to the tiny orange visitor arrayed with black, predator-discouraging spikes. Yet as I gazed at him, I received a reminder of two important truths:

God’s provision. Passionflower (Passiflora incarnata) is the only food source for gulf fritillary caterpillars. For several years I intentionally planted the vine by my mailbox, enjoying wave after wave of caterpillars until all the leaves were consumed and only bare stems remained. My summer reveries came to an end though when I realized neighbors’ mosquito treatments killed the caterpillars. I pulled up the vine, unwilling to create a death trap for my annual visitors. Sprigs of the vine continue to emerge from roots left in the ground. I sadly and dutifully pull them up too. The one the caterpillar was feeding on escaped my notice, hidden under another plant. But an egg-laying butterfly found it amidst all the other plants on my property. Isn’t that amazing?! And if God provides for butterflies and caterpillars and birds and lilies, we can be sure He’ll provide for His beloved children (Matthew 6:25-33).

Perseverance. By the time I discovered the miniature passionflower vine with its voracious visitor, we’d endured several weeks of drought accompanied by way-above-average temperatures. Although the plant’s leaves bore faded splotches, it had survived the unfavorable conditions and was available to host the egg that became the caterpillar. Endurance is an essential aspect of our walk with the Lord. Hardships, challenges, droughts of various kinds – we’re told to expect them. But great blessings, from godly character to eternal life, come with perseverance (Romans 5:3-5; James 1:12). The indwelling Spirit enables us to persevere until the day of Jesus’ return when God will complete the good work He began in us (Philippians 1:6).

At times we need reminders, don’t we? The world can be so loud and demanding, muffling God’s still, quiet voice. But He’s always with us, just as He promised, and sometimes He sends perfectly-packaged heavenly hugs to reassure us. Our Father knows each of us by name. He never loses sight of us. And He loves us so much more than we can fathom.

So I ask you not to lose heart over what I am suffering for you, which is your glory. For this reason I bow my knees before the Father, from whom every family in heaven and on earth is named, that according to the riches of his glory he may grant you to be strengthened with power through his Spirit in your inner being,  so that Christ may dwell in your hearts through faith—that you, being rooted and grounded in love,  may have strength to comprehend with all the saints what is the breadth and length and height and depth,  and to know the love of Christ that surpasses knowledge, that you may be filled with all the fullness of God. Now to him who is able to do far more abundantly than all that we ask or think, according to the power at work within us, to him be glory in the church and in Christ Jesus throughout all generations, forever and ever. Amen. (Ephesians 3:13-20)