Sunday before last, I had the privilege of attending two special services. That morning I watched as my 7-month old granddaughter, Emma, was baptized. 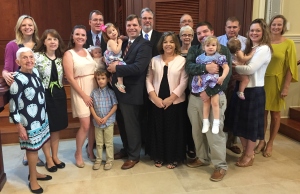 Four generations were present as her parents vowed to bring her up in the nurture and admonition of the Lord.[1] As the congregation promised to come alongside Mary and Justin as they raise Emma, I prayed she won’t be able to remember a day when she doesn’t know God loves her. I made a similar supplication when my daughters and other grandchildren were baptized, for there is no greater assurance than knowing you’re a child of the King.[2]

Later that day, I attended the memorial service for the mother of my dear friend, Susan Hunt. Mrs. Mac, as most affectionately referred to her, was 99 years old when she was called Home. She was ready. Her health had been declining for some time and, knowing the end of her earthly life was drawing near, she had been planning her funeral. Susan related that at times it felt like they were planning a party, as she and her daughters helped Mrs. Mac select hymns and scripture passages for the service. There was certainly a celebration that afternoon, of a life well-lived by a godly woman whose death was precious in the sight of her Lord.[3]

Our pastor, who shared 1 Corinthians 15:50-58[4] with Mrs. Mac just minutes before she passed away, spoke on the Apostle Paul’s declaration in Philippians, “For to me, to live is Christ, and to die is gain.”[5] Indeed, for believers, death is the gateway to eternal life in the presence of God. Yet even at Emma’s tender age, as she gets bumps and bruises from toppling over while learning to crawl, this life presents challenges. Jesus didn’t downplay the difficulties and hardships we’d face. He told his disciples to expect them, but added the promise He’d overcome the world. [6] And while we’re here, we’re called to do all to his glory[7], keeping our eyes firmly fixed on him, not our circumstances.

Pastor Todd Allen had the closing prayer, a sermonette in its own right, at Mrs. Mac’s service. Now 92, he proclaimed the same truth he declared at Ray’s funeral over 19 years ago. Speaking words of hope and assurance, Pastor Allen reminded us that when the days allotted to us are over, we too will be welcomed Home. What an encouragement to see the consistent faith of this senior saint across the years, a faith and consistency shared by Mrs. Mac and others who’ve gone before us. May we, like them, be able to say with the Apostle Paul when our days here are coming to an end, “I have fought the good fight, I have finished the race, I have kept the faith.”[8] The One who is with us from beginning to end, the Alpha and the Omega[9], is worthy of all praise, glory and honor. [10]

[4] This passage includes the proclamation, “Death is swallowed up in victory.”

One thought on “From beginning to end”