First-time obedience – it’s something we strive for and long for in our children, be they toddlers or teenagers. As we try to shape them into responsible, caring human beings we establish rules and enforce boundaries, preferably in a consistent and loving way. But oh do they ever push the limits. There are times when we even wonder if our children may be suffering from temporary hearing loss. We repeat our instructions over and over, frequently increasing our volume with each repetition.

Often our rules are meant to keep our children safe. For instance, we know the dangers of running in front of a car, playing with knives and sticking keys in electrical outlets, thus we warn them. At other times we try to help them learn how to play well with others. Hitting someone because you’re angry they took your “favorite” toy (which you may or may not have looked at for days) is not advisable, at least if you want the person to be favorably disposed to your presence. Likewise, cutting your sister’s hair, “so she can see better”, without asking Mommy first will more than likely result in your scissors being kept out of your reach.

Parenting is not for the faint of heart for MANY reasons, guiding and disciplining day in and day out being near the top of the list. After raising my daughters, I now have the opportunity to come alongside Mary and Justin to help them bring up their three little ones. 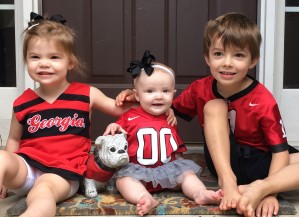 Though it’s tempting to take the easy route and fall into the role of indulgent grandmother, I know it wouldn’t do any of us any favors, least of all the children. Hence I adhere to the house rules, sometimes stating, “Mommy (or Daddy) says . . . ”, to reinforce the idea of obedience even when they’re not present.

Several months ago, after I’d repeatedly asked Joshua to stop engaging in some now-forgotten misbehavior, I thought, “I just wish he’d obey the first time!” Almost immediately, a still, small Voice spoke to my heart: “What about you? Do you always obey the first time?” The question pierced me to the core because the honest answer was, “No, Lord. I don’t.”

Occasionally, like Eve, I let myself be led astray by “Did God really say?” thinking.[1] Maybe I misunderstood. Maybe it would be ok to run a quick test, just to be sure. A while back, I left Joshua unsupervised for a few moments while I tended to his sister. He appeared with a sheepish look and a small cut on his finger. Even though we’d told him again and again knives are off limits because they’re sharp, he decided to check it out for himself. I can relate.

At other times my disobedience is more willful. I rationalize that given the circumstances, my behavior is ok, at least “this once”. Yet try as I might, I’ve never found a footnote anywhere in the Bible exempting me from God’s commands. Moreover, rationalization is a slippery slope which can lead us further and further away from who we want to be. King David is a prime example. It all started when he wasn’t where he was supposed to be. Yet committing murder was probably the furthest thing from his mind when he went up on the roof of the palace to get some fresh air. Nonetheless one poor decision led to another until he not only arranged to have an innocent man die, but he lied and committed adultery as well.[2] This is a sobering story indeed considering David was God’s chosen king,[3] described as a man after God’s own heart.[4]

Knowing our weaknesses, God promises to provide a way out when we’re tempted.[5] Even so, we don’t always avail ourselves of his provision. And when we don’t, when we decide to go our own way, He disciplines us. Not because He wants to squash our fun or limit our self-expression as our children sometimes accuse us of, but because He loves us.[6] We are fearfully and wonderfully made in his image[7] and He knows what’s best. His rules and boundaries are there to protect us.

Over the years, my mom has said countless times, “A self-learned lesson is the best.” As much as I’d like to shield my children and grandchildren from harm, I realize consequences are sometimes the ideal teacher, at least when we learn from our experiences. It is much the same with me and my heavenly Father. He frequently uses the pain caused by my disobedience to draw me back to himself. I have learned I cannot live a life which satisfies myself if I do not live a life which is satisfying to God.[8] To be sure, most of the pain comes from a sense of disappointing Him which in turn leads to a rueful desire to hide, like Adam and Eve.[9] I rejoice in the fact my Father never lets go or loses sight of me, even when I wander. It’s impossible to hide. Indeed He seeks me out. His discipline confirms I am his daughter[10] and his loving arms are always open to welcome me back. The peace and joy that come with restoration are priceless.[11]

Let us not lose heart as we raise the children entrusted to us. May we be wise as we set boundaries, consistent when discipline is called for, and steadfast as we assure them of our love. In so doing, we will give them a glimpse of the Father who loves them even more than we do.