The door of my aging mailbox refused to stay closed. After several episodes of retrieving its damp contents, I knew it was time to replace it. Upon inspection, the wooden post appeared to be sturdy, despite its slight tilt, which dates back to its initial installation and has been a source of irritation ever since. Being a frugal sort who adheres to the philosophy “waste not, want not”, I decided to replace the box and make do with the leaning post.

I made my way to Home Depot, determined to leave with only a standard-size mailbox and no new plants. I resisted the temptation to stroll through the garden department, went directly to the aisle where the mailboxes are located, paid for the one I selected and returned home.[1] Upon removing the old box, I realized the wooden board it had been attached to was warped and the holes that accommodated the screws were compromised. Not to be thwarted, I decided to use longer screws in an attempt to secure the new box to its perch.

After I attached it, I stood back to admire my handiwork. The sight of the shiny new box contorted into place atop its aged roost was disappointing to say the least. The effect was similar to viewing photos of me and my granddaughters. Just as their unlined faces make mine look more wrinkled by comparison, the post appeared so much older once topped with the gleaming mailbox. And, while I’m ratting on myself, I may as well admit that it took exceptional effort to open and close the door because of the box’s forced mis-alignment. Nonetheless, I decided to live with it.

From the moment I took the initial step back and beheld the disparity between old and new, as well as multiple times since, I’ve been reminded of Jesus’ parable warning against mixing old and new. His examples of using a new patch on an old garment and putting new wine into old wineskins appear in three of the four Gospels, underscoring the importance of His admonition.[2] As recorded in Matthew, after replying to some disciples of John the Baptist regarding fasting, Jesus went on to say, “No one puts a piece of unshrunk cloth on an old garment, for the patch tears away from the garment, and a worse tear is made. Neither is new wine put into old wineskins. If it is, the skins burst and the wine is spilled and the skins are destroyed. But new wine is put into fresh wineskins, and so both are preserved.” (Matthew 9:16-17)

The parable was most likely directed at the ever-judgmental Pharisees hovering nearby. Over the centuries since Moses received the Ten Commandments, the religious legalists had tacked on more and more requirements and drifted further and further away from the Spirit of the Law. Jesus reserved some of His harshest criticism for the spiritually-blind leaders who misled those who looked to them for guidance. (Matthew 23:1-36)

Jesus came to fulfill the Law (Matthew 5:17) and to establish the New Covenant (Luke 22:20) as so beautifully foretold by the prophet Jeremiah. Nonetheless, some of the early believers thought they had to add their formerly-mandated works of righteousness to Jesus’ all-sufficient sacrifice. The Apostle Paul made it clear that was unnecessary, for them and for us. (Galatians 5:6; Galatians 6:15; Ephesians 2:8-9) Likewise, we are told to put off our old selves, to be renewed in the spirit of our minds and to put on our new selves. (Ephesians 4:20-24) In addition, we are called to walk as children of light, having nothing to do with darkness. (2 Corinthians 6:14; Ephesians 5:8) 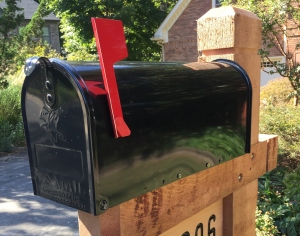 The incongruence between the old post and new mailbox continued to grate on me, so I gave in and contacted the HOA-approved mailbox supplier. He came to rectify the situation yesterday. Even though I returned home after dark last night, I breathed a sigh of relief when the new post-new mailbox ensemble appeared in the light of the street lamp. Ahh, the incompatibility was gone.

Oh that we would be similarly perturbed by inconsistencies between the faith we profess and our actions. May we never think we can simply patch our old natures with a dab or two of Christ’s righteousness or live in twilight on the edge of darkness when we’re called to a life of light. And may we long for Christ’s return when the old will pass away completely, all will be made new and our struggles against darkness will cease forever. (Revelation 21:1-5; Revelation 21:21-27)

[1] Long-time readers will recognize the self-control this required of plant-loving me!