I’m captivated by British history, probably because it’s part of my history. The lineage of all four of my grandparents can be traced back to the isles across the Atlantic, at least in part. And who doesn’t enjoy a fairy tale romance? Thus, like millions of others around the globe, I delightedly followed the updates surrounding the engagement and nuptials of Prince Harry and his American sweetheart, Meghan Markle, earlier this year. So many traditions, so much pomp, as a real-life princess wed her prince charming.

Of the many details to savor and contemplate, one has continued to resonate with me. Queen Elizabeth’s wedding gift to Meghan was a new title, signifying her acceptance into the royal family. In historical parlance, Meghan is a commoner, without the usual pedigree that accompanies, and in the past was required of, royal brides. Her Royal Highness, the Duchess of Sussex, will now receive the honor due her new role, not because of her worthiness, but due to her relationship to the reigning monarch and the dignity pertaining to the position. The queen’s approval supersedes Meghan’s past and serves to silence the nay-sayers.

And so it is for those of us who’ve been chosen by the King. Scripture is clear that we’re commoners, unable to gain access to the throne on our own merits. (Ephesians 2:1-9) In fact, left to ourselves, we wouldn’t even seek an audience with the Lord. (Isaiah 64:6-7b) But, wonder of wonders, He chose us before the foundation of the world to be adopted into His family, because He loves us! (Ephesians 1:3-8a) Not only does God see us a chosen race, a royal priesthood and a people for His own possession (1 Peter 2:9), He calls us His children (Romans 8:15-17; 1 John 3:1) Furthermore, because of our Elder Brother’s atoning sacrifice, we now have access to the throne of grace. (Matthew 27:50-51; Hebrews 4:14-16)

Just as there was much discussion regarding Meghan’s non-aristocratic lineage and the fact she’d been married before, the tiniest details of her behavior have been scrutinized. From posture to if or how she crosses her legs while seated to her facial expressions while chatting with Queen Elizabeth – everything has been evaluated versus standards expected of members of the royal family. Meghan’s actions will provide evidence of her understanding and respect of the position bestowed upon her. Her conduct may enhance or tarnish the reputation of the monarch who welcomed her.

Although many years have passed, I well-remember a colleague’s comment that he wouldn’t put a fish sticker on the back bumper of his car because there were times his driving habits didn’t befit a Christ-follower. Those of us listening chuckled, but shifted uneasily in our seats, recognizing ourselves in his statement. As members of God’s family, we are also His representatives. In fact, the third commandment, “You shall not misuse the name of the LORD your God”, whose interpretation is too-often limited to not using God’s name in a profane way, addresses God’s concern about how He’s represented by those who bear His name.[1]

We are called to honor our Father and His name by:

Putting off our old ways and becoming transformed to fit our new personas is challenging. (Romans 7:21-25; Romans 12:2) Fortunately for Meghan, she has a sister-in-law who’s already been in the royal spotlight for several years and appears willing to teach her the finer points of being a duchess. In his letter to Titus, the Apostle Paul made it clear that women who are further along in their spiritual journeys are to do the same for their younger sisters in the faith, instructing them through reverent behavior and sound teaching. (Titus 2:3-5)

As I was double-checking Meghan’s official title, I came across an interesting factoid. Only women born into the royal family may use “princess” before their names.[2] Not so in God’s family. There are no divisions or distinctions among Abraham’s spiritual offspring. (Romans 10:11-13; Galatians 3:27-29) 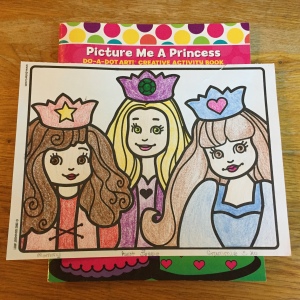 I enjoy coloring with my young granddaughters. A recent art session found me recreating myself and my daughters on the page. When I saw the title of the book the page was pulled from, I smiled. “Picture me a Princess”. Why, yes, I will! Because God calls me His child, I am a princess, a daughter of the King!

Sisters, may we recognize and embrace our identity in Christ and may we spur one another on to love and good deeds (Hebrews 10:23-25) that we might represent Him well before a watching world.

[2] I suppose popular culture overrode that mandate when it came to “Princess Di”.